W.H. Brewer (1867) made the earliest known collection of this group in 1862 on Mt. Hamilton (Santa Clara Co.) just a few days after he had found its striking associate, Clarkia breweri (A. Gray) Greene. Gray never assigned a species name to the specimen, and this campanula was not collected again until Rattan found it on Mt. Diablo (Contra Costa Co.) and described it as Campanula exigua (Rattan, 1886). In his description, Rattan referred to a plant taken that same year by Mrs. Curran on Mt. Tamalpais (Marin Co.). Alice Eastwood (1898) included the Mt. Tamalpais plant in Campanula angustiflora Eastwood. In her discussion of the new species, Eastwood referred to “very young specimens of an annual Campanula” collected in Priest Valley (Monterey Co.) that shared some characteristics with both named taxa, but that she chose to retain in Campanula angustiflora. Howell (1938) eventually described this plant as Campanula angustiflora var. exilis, herein named Campanula griffinii.1)

All of the California annuals (Campanula angustiflora, Campanula exigua, Campanula sharsmithiae and Campanula griffinii) have been a source of confusion since their discovery, judging from the misidentifications found in herbaria, and they are not known to be closely related to any other campanulas. Treatment of small-flowered and annual Old World campanulas has been controversial (Boissier, 1874; de Candolle, 1830; Gadella, 1964, 1966; Federov, 1957), and knowledge of New World campanulas is very limited (Shetler, 1963). Here I give detailed descriptions of the Californian annual campanulas in order to facilitate eventual comparison between them and their Nort American relatives and between them and their Mediterranean counterparts.2)

Morphological simularities of these taxa to other Nort American Campanulideae may be due to convergence; consequently, the relationships of these four species (Campanula angustifloar, Campanula exigua, Campanula sharsmithiae and Campanula griffinii) are obscure.

Campanula angustiflora can be distinguished from other small-flowered campanulas by its sessile, oblong-ovate, coarsely serrate leaves. It is vegetatively similar to Heterocodon and Triodanis, both of which have at least some cleisogamous flowers. Many of the lower cauline leaves of Campanula angustiflora subtend very short flowering stems, and this strengthens the resemblanche tot Triodanis, the leaves of which subtend seemingly axillary but actually terminal, sessile, flowers (McVaugh, 1945). The possible relationship of these three taxa trough some very early ancestor should be kept in mind. 3)

Flowers of Campanula angustiflora depart from the pattern typical for Campanula as described by Shetler (1979): the corollas are small, cylindrical, and inconspicuous; the filaments are not dilated; the style is incompletely papillate. However, the corolla is usually exserted from the calyx lobes and the filaments are ciliate. Because the style lobes are not completely appressed to each other during style elongation, pollen is deposited on and trapped in the stigmatic area before anthesis. Cross-pollination is not necessarily excluded, but, considering the reduction in characters usually associated with allogamy and the presence of self-compatibility, it seems likely that autogamy is the primary breeding system in this species. In her description of Campanula angustiflora, Eastwood (1898) stated that the sides of the style were entirely smooth and illustrated in that way in an accompanying figure. The pictured style has fully recurved lobes: at that point in development the stylar papillae would all be invaginated (Shetler, 1979).4)

Campanula angustiflora and Campanula griffinii are predominantly autogamous, an unusual character stat for the genus. These are the first annual campanulas reported to have chromosome numbers n = 15 or n = 17.5) 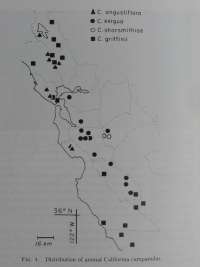 Four of the ten species of Campanula that are found in the California Floristic Province are annuals; Campanula angustiflora - grows in the North Coast Ranges and in the Santa Cruz Mts. 7)

Seeds of field-collected plants were grown at the University of California Botanical Garden in pots of “UC Mix, formula C” soil (Matkin and Chandler, 1957), in insect exclosures, for studies of morphology, cytology, and pollination system. Seed sources are indicated in the Taxonomic Treatment and included at least one northers and one southern population of each species except Campanula sharsmithiae, seeds of which were not available. Voucher specimens are in UC.

Buds from field-collected and garden-grown plants were preserved in Carnoy's 6:3:1 solution; microsporocytes were stained in acetocarmine for chromosome preparations. Pollen was mounted in lactophenol and cotton blue for study of general morphology and was prepared following the method of Lynch and Webster (1975) for study of exine ultrastructure, except that material was CO2-critical-point-dried directly from 100 percent ethanol. After initial preparation the pollen was coated with 30nm of gold palladium and viewed on a Coates and Welter Model 50 Emission Scanning Electron Microscope.

Flowers of carpellate parents in artificial crosses were emasculated before anthesis and later pollinated by transferring pollen from the style of the staminate parent, on sterile forceps, to the stigmatic surface of the carpellate parent. Except when they were being manipulated, the flowers were covered with Kimwipe bags before anthesis with no further treatment. Self-compatibility of Campanula exigua was tested by transferring pollen from the style to the stigma of the same flower. Pollen is deposited on the stigmatic area of Campanula angustiflora and Campanula griffinii before anthesis and therefore was not artificially transferred. Presence of apomixis was tested by leaving emasculated flowers unpollinated.

The two most obvious characters that separate these annual species are leaf width and corolla size (Figs. 1 and 2). 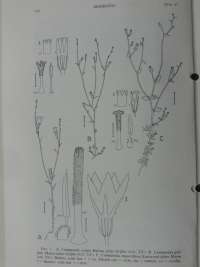 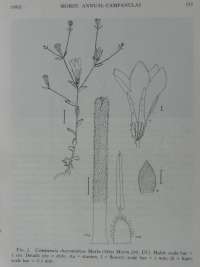 Campanula exigua and Campanula sharsmithiae have large flowers. The former has thin, narrow leaves and the latter has fleshy, broader leaves. Campanula griffinii has narrow leaves and small flowers, and Campanula angustiflora has broad leaves and small flowers. These species also differ in ovary shape, filaments shape, and position of upper bracts. These characters, along with flower size and leaf shape, are more constant under garden conditions than most other characters. For this reason, they were chosen as major, differentiating characters.

Campanula exigua, Campanula sharsmithiae and Campanula griffinii have n = 17, wheras Campanula angustiflora has n = 15; they are the first annual campanulas reported to have these numbers. At least two populations of each species (only one for Campanula sharsmithiae) were counted; vouchers are deposited in UC and indicated in the Taxonomic Treatment. 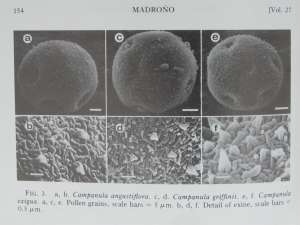 Reciprocal crosses among all species were unsuccessful. Unemasculated, bagged flowers and unbagged flowers of Campanula angustiflora and Campanula griffinii set seed (50-80 seeds per capsule), but emasculated, unpollinated flowers did not produce seed. These two species are self-pollinating and self-compatible; they do not appear to be apomictic, but pseudogamy cannot be ruled out. No flowers of Campanula exigua produced seed. Since even control, intrapopulational crosses were unsuccessful even though flowers in the field produce up to 100 seeds each, failure may have been due to technical problems such as mechanical damage to the stigma. Campanula exigua is not self-pollinating and seems to be self self-incompatible.